Last weekend, the long-awaited wedding ceremony took place at the Windsor chapel, where the entire world gathered to witness the royal couple finally get hitched. Among the numerous attendants from the royal family, there were also many celebrity faces sat in the church pews; princess Diana’s dear friend Elton John and his partner David Furnish, lovely Amal and George Clooney, the always fashionable Victoria and David Beckham, the Hollywood heartthrob Tom Hardy and his wife Charlotte Riley and many others.

After the royal couple exchanged vows and rode into the sunset, questions begun to arise – what about their honeymoon? What is the newlyweds’ dream destination of choice? There are already some speculations about the possible destination of their wedding trip; a ‘mini moon’ visit to Ireland, the safari-themed honeymoon trip to Africa, a tropical paradise in the Caribbean or a more tradition European holiday in Italy or France. 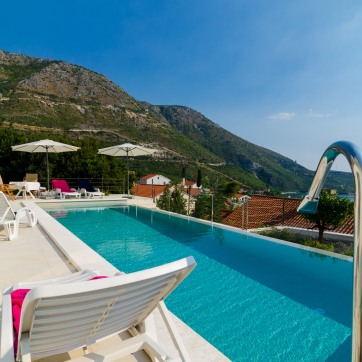 One of the possible destinations is also Croatia, a small country on the coast of the Adriatic Sea, famous for its beautiful cities, especially the city of Dubrovnik, that gained major international recognition thanks to it being one of the sets of the popular tv show, Game of Thrones. This pearl of the Adriatic is definitely an ideal honeymoon destination – and a popular celebrity destination as well! Dubrovnik and the surrounding smaller, picturesque places like Plat, Mlini, Srebreno have been targeted by many of the Hollywood celebrities like Julia Roberts, sir Roger Moore, Eva Longoria, Beyonce and Jay-Z and others. This seaside pearl is also famous for its luxurious villas that might just be the perfect choice for the royal couple. What will they decide on? We’re on the edge of our seats!

On Saturday, May 19th, in the chapel of Windsor castle, the new princ and princess exchanged vows amongst the royal family members and celebrity friends such as Oprah Winfrey, Idris Elba, David i Victoria Beckham, Tom Hardy, the full cast of „Suits“, James Corden, Amal and George Clooney , and many others.

As soon as the royal couple got engaged, the rumours about the wedding details started to buzz. The biggest mystery was Meghan Markle’s wedding dress, which was held secret until the moment she stepped out of the car infront of Windsor castle. Suprisingly, she didn’t choose the British haute couture couple Ralph and Russo, but instead decided on an elegant and simple wedding dress by Givanchy, a hommage to the classic style of the 1960s and 1970s, resembling the style icon and Givanchy’s favourite muse, Audry Hepburn.

Besides the wedding dress and the above mentioned guest list, princ Harry and princess Meghan’s honeymoon destination has also been a topic of speculation. Although the couple is known for their humanitarian work, especially in Africa, some other, more romantic destinations were also on the list of possible honeymoon destinations, such as Fiji, Hawai, numerous exotic islands, as well as Croatia. Many considered it to be likely that Croatia, especially the Dubrovnik region, would be one of the stops on the honeymooner’s itinirary, considering that princ Harry’s father, princ Charles and his wife Camilla often chose Croatia as their holiday destination.

The Dubrovnik region has several advantages when it comes to celebrity holidays – besides being a paradise on earth with numerous beaches, beautiful, historic cities, clear blue sea and untouched islands scattered all over the Adriatic, it is also a very safe, secluded and private destination, which would allow pinc Harry and princess Meghan a honeymoon away from the eyes of the papparazzi and the world.

One of those villas is the newly built Villa Orlando, which can accomodate up to 10 people in 5 spacious and modernly decorated bedrooms. Several private terraces and balconies offer incredibly views of the Adriatic, the Dubrovnik riviera and charming islands. Villas like Villa Orlando are often occupied by celebrity guests during many recent filmings in Dubrovnik and the surrounding areas, like the famous series Game of Thrones, as well as movies like Star Wars and Mamma Mia. Will princ Harry and princes Meghan take the advice of their celebrity couple friends, Amal and George Clooney, and choose one of the villas on the Adriatic coast, it remains to be seen…